Apartments for rent in Orosei Gulf 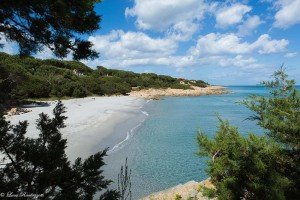 Our apartments for rent in Cala Liberotto are situated immediately North of the Orosei Gulf, one of the most beautiful and interesting parts of Sardinia.The charming beaches of Sas Linnas Siccas and their crystal waters are less than one hundred metres away from the White Houses. On the South side, the beach ends up with striking dark volcanic rocks of basaltic type. On the contrary, the North side of the beach ends up with marvellous pink granites which, from this point on, carry on for several kilometres northwards opening in a number of beaches, coves and inlets. Southwards of Sas Linnas Siccas, the dark volcanic rocks opens in the Fuile’ e Mare beach, a large inlet with thin white sand and at walking distance from the White Houses.

Southwards of the Fuile’ e Mare beach, the coast turns into a spectacular long cliff of volcanic rocks known with the name of Dancalia. The cliff of Dancalia runs southwards for about seven kilometres until it meets the mouth of the Cedrino River, from where the huge Orosei Gulf begins. Northwards of the Sas linnas Siccas beach, the coast continues for a few kilometres up to the heart of Cala Liberotto all the way through outstanding beaches, coves and small inlets separated by pink granites and at walking distance from the White Houses.
Northwards of Cala Liberotto the coastline becomes less irregular and the coves and small inlets are replaced by the long beaches of Cala Ginepro, Sa Curcurica and Bidderosa. The beaches are all characterised by lovely thin white sand, crystal-clear blue water and the intense green of the Mediterranean bush. Moving Northwards, there begins the municipality of Siniscola, where the coastline opens in the amazing beaches of Berchida and Capo Comino, the latter characterised by extensive sandy dunes covered with juniper, myrtle and other Mediterranean plants.

The town of Orosei is less than ten kilometres away from Sas Linnas Siccas and can be reached through the National Road 125. In the proximity of the town, the coastline is characterized by a long beach of thin white sand known with the name of Sa Marina or Marina di Orosei.

The buildings in the Orosei town centre have been largely preserved and keep most of their original traits. There are numerous restaurants and bars which, together with the frequent shows and public displays organized during summer by the city council, make even more fascinating the atmosphere of a night-time walk along the lovely alleys of the city centre.

Leaving Orosei and heading southwards on the National Road 125, towards the town of Dorgali, travellers come across the renowned Ispinigoli Caves. From here, it is possible to turn left to get on a small road which leads back to the coast and to the amazing beaches of Cala Cartoe, Osalla and Su Petrosu. Continuing on the National Road 125 and heading past Dorgali, a short detour allows visitors to reach the seaside resort of Cala Gonone which lies in the heart of the Orosei Gulf.
From here, thanks to the many companies which operate daily boat cruises, it is possible to reach the famous Bue Marino Caves and the beaches of Cala Luna and Cala Sisine, amongst the most stunning and fascinating beaches of the whole Sardinia. On this part of the Gulf, the calcareous rocks of the Supramonte ridge falls sheer to the sea and the coastline becomes extremely jagged and inaccessible up to the Monte Santu Cape which closes the Orosei Gulf.